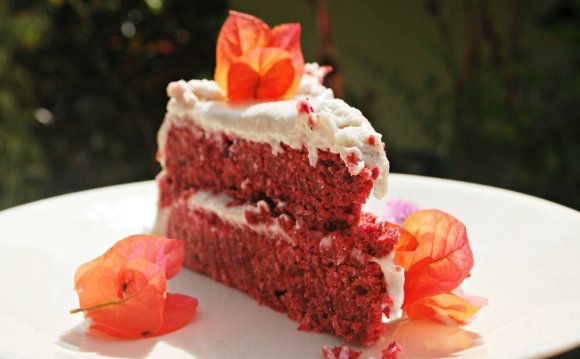 Now, today, i am aware exactly what you’re thinking – last week you published a recipe for creamy chicken and rice soup, amIright? Fair sufficient. I’ve been making these vegan red velvet cupcakes for years! I came across all of them during my vegan “exploratory” duration (performedn’t end well, obviously) and had been so blown away which they became my go-to recipe ever since. I’ve most likely made this dish, oh, thirty times in my life, I kid you not.

Indeed, I made these suckers for O as he came over for supper the very first time. I'd a dozen casually strewn about on a cupcake stand–casually–like I whipped up a batch according to my tempestuous craving du jour. A few months later, he proposed. Coincidence?

What do you believe?

These vegan red velvet cupcakes are so, so wet, with just the most perfect level of cocoa, a powerful depth of flavor, and just an ideal texture. Normally, if you're not vegan, you can top all of them with regular, ole omnivorean cream-cheese frosting like i did so, nonetheless it’s an easy task to replace down vegan-friendly cream cheese, like Tofutti, and butter, like Earth Balance.

Have you ever heard of “Vegan Cupcakes dominate the World”? No matter if you’re an animal meat and butter-eater, you might have heard about the total glory of Isa Chandra Moskowitz’s amazing dishes. No pity, there’s no adaptation here; i take advantage of her dish verbatim.

A few months straight back I uploaded my ultimate favorite recipe for red velvet cake, so just why the alteration of heart, you ask? No modification! I love that super thick, awesome damp, somewhat much more involved dish for layer cake, and I wouldn't stray–never, I say! But for a quick batch of cupcakes, this awesome easy, super easy, no-mixer-involved dish is my permanent go-to.

The perfect purple velvet cupcakes simply happens to be vegan!